COPIES OF DESIGNS BY ANTONIA PINEDA

Antonio Pineda was an internationally renowned Mexican modernist designer/silversmith who was known for his bold and striking designs. He was a member a small cadre of brilliant silversmiths living and working in Taxco, Mexico who became internationally known in the 40s–70s.

Born in Taxco in 1919, Antonio Pineda Gomez was third of 10 children. He apprenticed briefly with William Spratling and Mexico City painter/silversmith Valentin Vidauretta before opening hisown workshop in 1939. Pineda acknowledges Vidauretta was a great influence in spurring him to develop his own ethos of design.Antonio’s design concept ultimately coalesced into his signature style,which was bold and spare,architectural designs of hollow construction using inventive joining, catches,and closures. Aside from their intrinsic beauty, Pineda’s jewelry is amongst the most technically refined ever made in Taxco.

A major turning point in his career came when his work was included in the 1944 exhibition at the California Palace of the Legion of Honor in San Francisco. Richard Gump, heir to the exclusive Gump’s department store purchased his collection and offered to sell his designs.He continued to design jewelry and sculpture and exhibited throughout Mexico, Europe,and the US.One of Pineda’s favorite sayings was: “The richness of silver is immortal. It doesn’t die.” 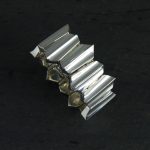 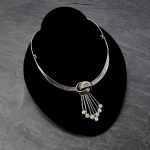 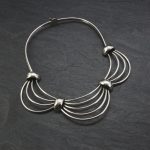