COPIES OF DESIGNS BY HECTOR AGUILAR.

Aguilar opened the Taller Borda in 1939 and it became one of the most successful workshops in Taxco. Although, his early works drew heavily from pre-Columbian motifs,he soon expanded his designs to include bolder, more sophisticated melding of stones and silver. Aguilar was noted for his strong, energetic designs with attention to thoughtful construction.

Aguilar not only had a silver“taller”, but also copper, tin, and carpentry workshops where he designed and produced flatware, tea sets, trays, chess sets, bowls, light fixtures, sconces, cabinets, and mirrors.Hundreds of silversmiths and other artisans trained at the Taller Borda, and the shop rapidly established itself as one of Mexico’s leading silver retail merchants. Aguilar closed his shop in 1966 and retired to Zihuatanejo.

Considered one of the top silversmiths at the Taller Borda, DonLuis Flores continued to make Aguilar’s vision in silver live. Since his death in 2010, his son Jaime continues the tradition.The copies of Aguilar’s work which we carry are done by Jaime Flores 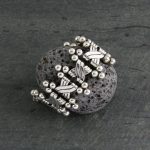 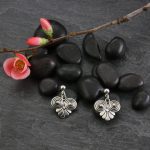 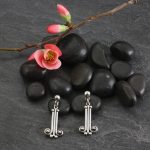 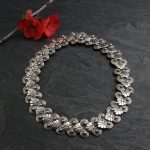 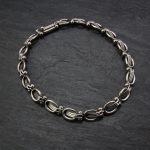