Excerpt from Mexican Silver by Penny Chittim Morrill and Carole A. Berk

Margot van Voorhies moved to Mexico in 1937.  She eventually found her way to Taxco, at the time a center for artists and bon vivants.  It was in Taxco, that she met and married Antonio Castillo.  In 1939, Antonio established his own workshop, “Los Castillo” with Margot as principal designer, along with Jorge “Chato” Castillo and Salvador Teran.

Antonio and Margot were married for 10 years. When they divorced, Margot became Margot de Taxco.  She opened her own workshop in 1948.  Her work remains unique – influenced by her interest in Arti-Deco, Mayan and Japanese motifs and her work with enamel on silver.  She insisted on meticulous production techniques.

After much success in the 50s and into the 60s, a catastrophic fire at her taller and problems with satisfying her obligations with union contracts, she went bankrupt.  The government stepped in and sold her business to pay her workers.  She ended up giving the “dyes” of her designs to her silversmiths as payment.

We offer a collection of designs by Margot de Taxco from those original dyes. 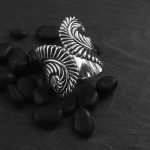 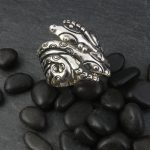 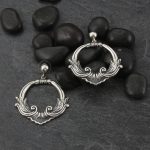 Sterling Silver Earrings w/ Oxidization – Post More from Artist:   Margot de Taxco All Designs Are Made From Her Original Dyes
$150.00 Add to cart
Out of stock 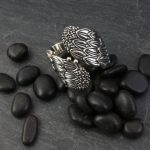 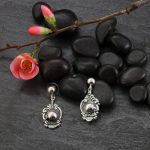 Sterling Silver Earrings w/ Oxidization – Post More from Artist:   Margot de Taxco All Designs Are Made From Her Original Dyes
$95.00 Add to cart
Out of stock 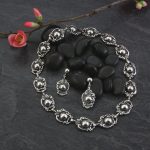